For best results, use the following guidelines for proper placement:

1. Determine where mosquitoes are breeding

The Mosquito Magnet® must be located between the breeding areas (standing water, bushes, etc.) and the people areas (patio, deck, etc.) in order to capture mosquitoes at their source, before they get to you.

2. Place the trap away from people areas

Place the trap as close to the breeding area and as far away from the activity as possible. Typically, 30-40 feet is far enough from human activity.

3. Place the trap upwind from the breeding area

Mosquitoes fly upwind looking for a meal. After a female mosquito bites a human, its weight is doubled and the mosquito will float back downwind to the resting area.

4. Place trap in an open area

CO2 is heavier than air therefore it stays close to the ground. The mosquitoes will follow the CO2 plume to the trap. If it's placed in high grass, the flow of the plume will be impeded and the mosquitoes won't find it.

5. Place the trap in the shade

Mosquitoes don't like the heat of the direct sun. As the sun sets, mosquitoes come out of their resting places.

R-Octenol is an EPA registered secondary attractant that mimics human breath. Much like Octenol, it is used in Mosquito Magnet® traps to attract biting insects including mosquitoes and no-see-ums. However, the active ingredient in R-Octenol lasts for 30 days- lasting 40% longer than regular Octenol! This attractant for mosquito traps is made in the U.S.A.

Why should I use it along with the Mosquito Magnet® trap?

What attracts mosquitoes best? The attractant R-Octenol increases your catch rates up to 10 times! Mosquitoes are not only a nuisance; they may transmit mosquito diseases that are a serious health threat to people and pets. It will lure biting insects to the Mosquito Magnet® trap and away from you and your family.

Because R-Octenol lasts for 30 days, it is ideal for Executive Trap owners running their trap on Mode 4, as the propane tank also lasts 30 days in this mode.

What Does It Attract?

R-Octenol attracts most mosquito species, including salt marsh mosquitoes, as well as no-see-ums and black flies. The insects are attracted by the R-Octenol and are drawn to the Mosquito Magnet® trap where they are captured, then dehydrate and die.

Which attractant is right for you?

How Often Should The Cartridge Be Replaced?

The R-Octenol cartridge should be replaced every 30 days. After 30 days of use, the cartridge appears the same; however, it will no longer be effective as the R-Octenol will have been released.
The catch rate will be reduced if the attractant is not changed.

Lurex3™ is a patent-pending mosquito attractant that mimics naturally occurring human skin scents or odors known to attract mosquitoes.
This EPA-registered product is the only attractant developed for the Asian Tiger Mosquito. It has been designed for use with all Mosquito Magnet® Traps.
Made in the U.S.A.

What does it attract?

Lurex3™ attracts mosquitoes, particularly the Asian Tiger Mosquito, a day biter, and other species that may transmit mosquito-borne diseases such as West Nile Virus, Encephalitis and Heartworm.
Our studies have shown that Lurex3™ out catches Octenol by 3:1 on the Asian Tiger Mosquito.
The insects are attracted by the carbon dioxide and the Lurex3™ and are drawn to the Mosquito Magnet® trap where they are captured, then dehydrate and die.

Which attractant is right for you?

Why should I use it along with the Mosquito Magnet® trap?

The addition of Lurex3™ increases the catch rate of your mosquito control system. Mosquitoes are not only a nuisance; they may transmit diseases that are a serious health threat to people and pets.
The Lurex attractant, known as Lurex3™, will lure biting insects to the Mosquito Magnet® trap and away from you and your family.

How Often Should The Cartridge Be Replaced?

The Lurex3™ cartridge should be replaced every 21 days. After 21 days of use, the cartridge appears the same; however, it will no longer be effective since the Lurex3™ mosquito attractant will have been released.
The catch rate will be reduced if the attractant is not changed.

If maintained properly, the Mosquito Magnet® can run at its best for many years. When run 24 hours a day, 7 days a week the propane tank and attractant last a full 21 days.

If replaced in a timely manner you will optimize your catch rate and break the breeding cycle of mosquitoes in your yard.

Starting Your Mosquito Trap in the Spring

Be sure to start running your mosquito trap before mosquitoes start propagating. Perhaps you're wondering "when does mosquito season start?" Once the temperature reaches 50°F consistently, mosquito eggs that remained dormant during the winter will begin hatching. Female mosquitoes that have spent the summer in protected areas like basements and trees are now ready to come out and lay their eggs. Make sure that you're ready!

When does mosquito season start? With the increase in overall temperatures, mosquitoes are hatching earlier in the spring and the length of the “mosquito season” has become extended. One particular mosquito species has shortened the time needed for it to develop and reproduce, making more mosquitoes in a year – this is a result of the Northeast region of the United States warming by only 1°F!

Not only are mosquitoes emerging earlier as warmer weather arrives sooner, they are also staying around longer as the first frost is delayed. The first frost, which usually kills the mosquitoes or sends them into hiding for the winter, has been occurring later than usual in some regions of the country.

Mosquitoes can be particularly troublesome when a drought occurs resulting in street drains and water sources shrinking and becoming stagnant. Mosquitoes love this type of situation for their egg laying.

To further exacerbate this problem, a rainfall after a drought allows for mosquito eggs to hatch and larvae to emerge. Larvae that are found in recovering smaller ponds often do not have any predators to limit their numbers. Fish that normally eat them have either died during the drought or do not live in such ponds.

These weather conditions can affect mosquito emergence in your region. Being prepared for mosquitoes before they arrive in your neighbourhood is the best preventative method for any homeowner. With outdoor mosquito control equipment, you can be ready when mosquito season starts to combat those infectious vectors so they don’t make a fun summer season miserable for your family, pets and visitors.

Storing Mosquito Traps for the Winter 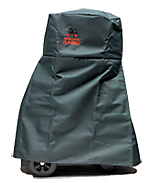 Follow these steps below every 21 days and use them as your normal maintenance schedule.

Using an attractant is critical to the performance of your Mosquito Magnet®. The attractant cartridge should be replaced every 21 days. After 21 days of use, the cartridge appears the same; however, it will no longer be effective as the lure will have been released.
The catch rate will be reduced if the attractant is not changed.

It is recommended that you use the Quick-Clear Valve after every propane tank change to prevent the nozzle from getting clogged. Some areas of the country may have what we refer to as "dirty gas". Dirty gas is caused when a propane manufacturer does not thoroughly filter the impurities from the propane. Using the Quick-Clear Valve after each tank change should help alleviate this problem.

If the net is clogged, torn or damaged in any way, it must be replaced. During months of a reduced catch rate it is still necessary to replace your net as pollen, dust and dirt can prohibit airflow and prevent your trap from working at peak efficiency. To order replacement nets and other accessories, please visit our web store or local distributor.

Have your propane tank refilled/swapped by an authorised propane dealer.

5. Check The Side Vents for Bugs.

Removing and checking the inside of the side vents to ensure that there are no bugs stuck to the inside of the vent will maximize air flow thru the trap. Heavily clogged vents will reduce your vacuum and your catch.

Periodically wipe down the outside of the long-lasting mosquito trap with clean water and a damp cloth. For outdoor mosquito control that is long-lasting, CO2 mosquito traps must be maintained properly.

There are no products to list in this category.